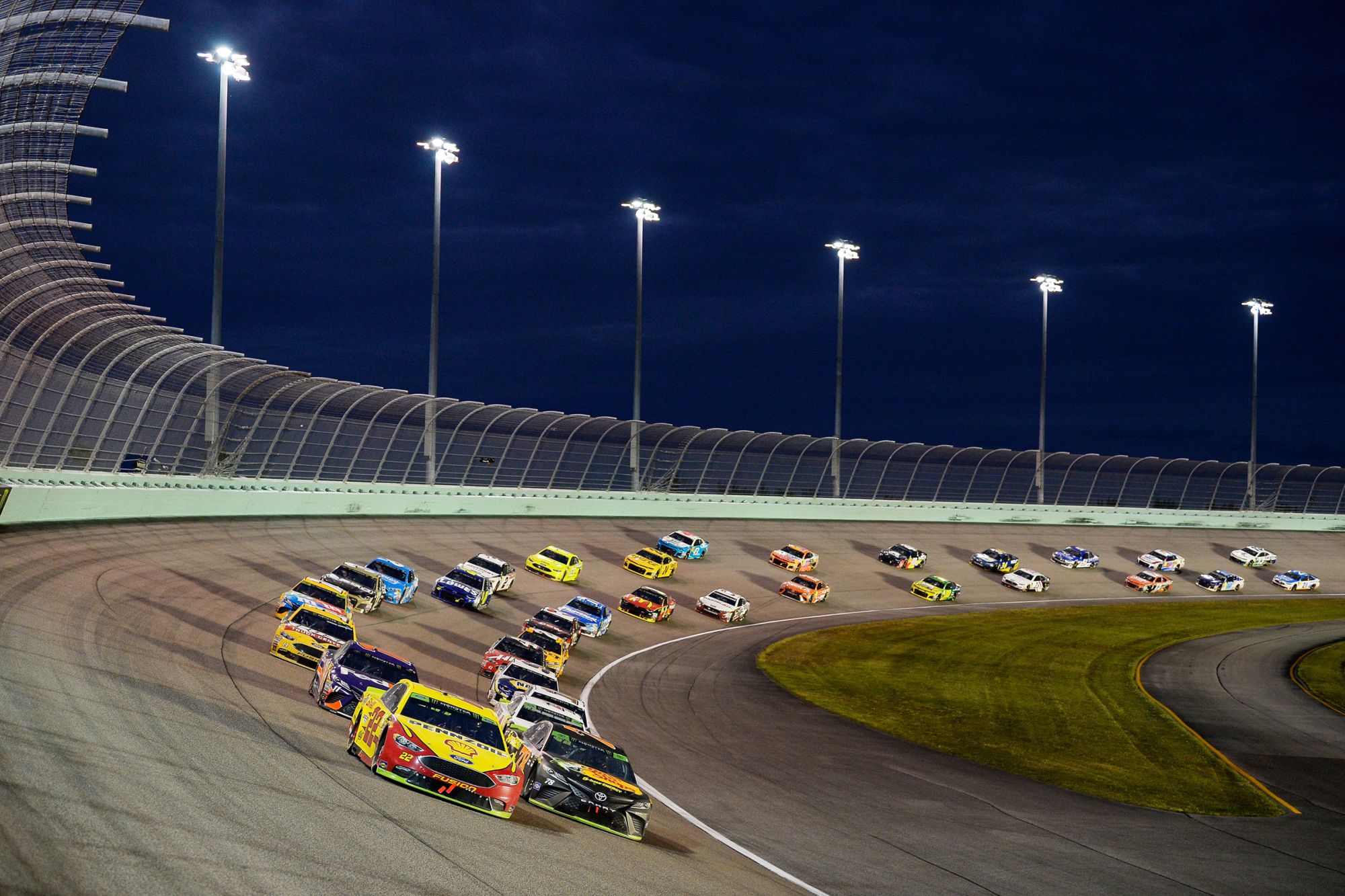 In February last year, the Daytona 500, the NASCAR season opener, drew a Nielsen Rating of only 5.3. That was an all-time low.

Opinions expressed by Entrepreneur contributors are their own.

It’s 7:30 p.m. on a Friday night, and the crowd is chanting, waiting eagerly for the main event to start. The weather is sticky and humid, but nobody seems to care. Some have even been waiting for hours to get in and bask in the glory that awaits them.

Related: 7 Lessons for Young Entrepreneurs from a NASCAR Solopreneur

As start time nears, a near-religious fervor takes over the crowd. Many have donned identical hats and t-shirts. A middle-aged man passes me an especially large, juicy orange that must weigh twice what a normal one does. Upon closer inspection, I realize it’s been infused with moonshine.

Think this is a Trump rally? You’re wrong. It’s the latest iteration of World of Outlaws, a dirt and short track competition that is one of the last remaining racing events in the United States to sell out with regularity.

If you follow sports or even just business news, you’d be hard-pressed not to see all the stories out there about NASCAR’s dramatic fall in popularity over the past decade. From its height in 2005, America’s second largest sport has lost over 50 percent of its audience at live events and online.

NASCAR’s representatives and racing teams have chalked up this loss to everything from changing audience dynamics to schedule changes, all the while ensuring their sponsors (the life blood of the sport) that audiences are still there and engaged. Analysts attribute the loss to an overly long schedule, a misguided car redesign in 2007 that lowered the number of deadly but often exciting crashes and newer online entrants competing for audiences’ entertainment time and dollar.

It’s an interesting phenomenon, to be sure. And how NASCAR, its teams, and sponsors are responding — and in many cases aren’t — offers stark lessons for entrepreneurs grappling with disruption and transformational change in their businesses.

Lesson 1: Know your core users and live true to their values.

NASCAR was built on a certain set of values when it was founded in 1947. Leading up to the formal incorporation of this racing circuit, those behind NASCAR were part of a Southern culture of “good ol’ boys” who liked racing one other on country roads. They participated in activities like bootlegging. Some even used the Confederate flag as a symbol for the Southern states’ rights movement.

Over time, however, NASCAR moved away from this image and expanded its business appeal. As it moved to different cities in the West and the North, officials considered banning some of the organization’s historic “outlaw” behavior. Many die-hard fans saw this as a betrayal of the sport’s founding values.

Related: Looking for Ways to Improve Your Customer Engagement on Social Media? Here are 8.

These factors, to some extent were why the brand lost fans. People just don’t identify with the sport as much as they once did. In February of last year, the Daytona 500, the NASCAR season opener and one of its largest events, drew a Nielsen Rating of only 5.3. That was an all-time low.

Loop in your audience members. If you run a business, the lesson here is that you need to know and understand your target audience members, including what they value. A brand must not stray from that — no matter the cost.

One strategy that can help maintain the loyalty of longtime customers is to bring them in to inform research on changes you plan to make to the brand’s image. Share this information with both newer and older fans so you can see how the groups compare. Take note of the feedback and let it influence your actions.

For most organizations, the goal is to find ways to incorporate the newer preferences of younger fans, while staying loyal to those who helped those organizations find success the first place. So, take a lesson: Avoid making the mistake Gap did in 2010. The clothing retailer ditched its classic square logo in favor a new, “sexier” version. Customers reacted so negatively that Gap soon re-adopted the original logo. In other words, wander too far from your roots, and you may face consequences.

Lesson 2: Always improve your product by listening to your users.

In 2007, NASCAR debuted the “Car of Tomorrow.” Officials unveiled the new car design after years of research, with the goal of lowering costs while raising performance and safety levels.

Neither fans nor drivers reacted positively to the change. Fans didn’t like how the car looked. They believed it slowed down the races. Drivers felt as though they needed to learn different racing strategies because of the new design, even at tracks they had raced on before.

Fans even started to find the races boring. In 2016 USA Today asked attendees why they’d stopped coming. They claimed that schedule and rule changes detracted from the event experience. They felt less inspired to tailgate because NASCAR had removed some of the pre-race entertainment.

Officials failed to make significant changes based on this type of feedback. This ensured a slide in attendance and ratings over the years. It was, and is, a classic case of a brand out of touch with its users. You need to listen to customers constantly if you want to preserve the loyalty you’ve built up — and NASCAR failed at this.

History is replete with examples of such failure. I’m reminded of how Blackberry’s team ignored user feedback on the way to its demise. One of the things that brought down Toys ‘R Us was a disregard for customer input around service experiences. The point is, if you’re getting warning signs from customers and you don’t pay attention, maybe you deserve to fail.

For years, NASCAR ignored the rising popularity of dirt and short track racing, or any new entrant with the potential to steal its fans.

A 2017 Racing News story compared NASCAR and dirt racing audience attendance. Thirty of 39 NASCAR races in 2016 saw declining viewership. One race actually collapsed from 9.5 million viewers in 2015 to 6.8 million the next year. In contrast, the same report noted that the Gateway Dirt Nationals had sold out all its seats well in advance.

The lesson here is find a way to work with, or at least fend off, potential competitors that may threaten you should you fail to take decisive action. For NASCAR, that may mean a return to dirt racing or more short tracking racing, competitions throughout the season.

One way to respond would be exploring partnerships with upstarts that may initially seem threatening to your core business model. The racing universe would also be vastly helped by directing more energy to digital channels, such as Facebook, where an audience of hundreds of thousands of fans is already active.

NASCAR has managed to hang on to lucrative TV contracts despite its ratings decline. However, these deals may be stopping the brand from adapting to consumers’ changing viewing habits. The races are often unavailable where many people want their content, through Netflix-style streaming (OTT) services. By largely sticking with traditional formats, NASCAR has unwisely let its audience age to the point that it’s become one of the oldest in sports.

This is what happens when you don’t disrupt yourself. Companies that find success for the long haul embrace change even if at first that change seems like a threat to their core business.

Sometimes you have to take a hit to survive and then thrive. Disney and ESPN streaming services were late to the party — launching subscription models only in spring of last year. Now they have a million subscribers paying $5 per month. NASCAR is also considering launching its own OTT streaming service in hopes of finding younger viewers again. In other words, if you see demand, don’t hesitate. Deliver as quickly as you can, or face the consequences.

The race is always on for any company to stay relevant to its existing customers, as well as attract new users. High-profile business failures are a sobering reminder for entrepreneurs never to rest on their laurels. Success doesn’t come easy, and often doesn’t last. Whether you’re making changes to your product, handling competitors or interacting with users, you must constantly re-tool if you want to stay on top.

We are The Ever Daily! Here are just a few words that describe us… sincere, friendly, ambitious, review writers, info providers, social media maniacs and all around team players.
Previous How To Avoid And Manage B2B Ecommerce Channel Conflict (2019)
Next Why Kate Middleton Is Eager to Be Back in the Royal Spotlight